The battle of Lambeth

This month it is the 50th anniversary of the creation of the London Borough of Lambeth. Later this year it is also the 200th anniversary of the Battle of Waterloo. But how many Lambeth residents recall the battle that was fought in the years leading up to 1965 over the identity of this part of south London? There may have been no deaths, but feelings ran very high. 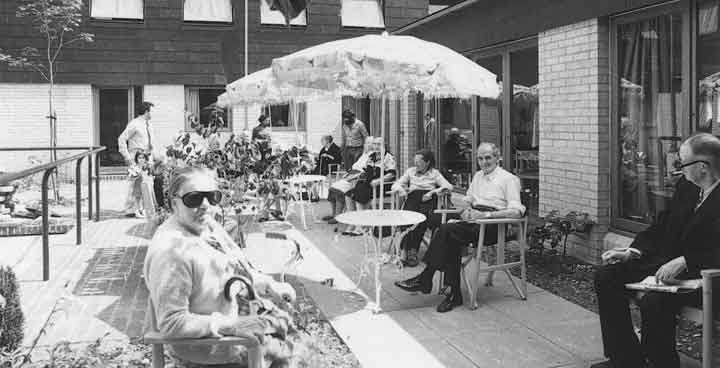 The new borough that came into being on 1 April 1965 was half as big again as the old metropolitan borough of Lambeth. Thanks to the addition of Clapham and Streatham and with 340,000 residents was the largest London borough in terms of population. The previous five-year build up to this had not been a universally happy time. The findings of the 1960 Royal Commission on London Government had set up a dramatic programme of change enshrined in the 1963 London Government Act: London would quadruple in size from 125 to over 600 sq. miles and incorporate significant areas of Essex, Surrey, Kent and Middlesex with former market towns like Croydon, Kingston and Barnet becoming brand new London Boroughs, while a new London authority, the Greater London Council, would provide regional government.

This was no more than belated recognition of the fact that London had grown massively in size. But a second consideration, paradoxically, was that the population of inner London had shrunk. War-time bombing and better housing opportunities in ‘new towns’ and the lure of the suburbs had emptied out inner London boroughs like Shoreditch and Finsbury. The solution was to bundle together groups of these smaller authorities into new larger ‘London Boroughs’, so neighbouring Camberwell, Bermondsey and Southwark combined to become the new London Borough of Southwark.

The rest of inner London was tidied up in this way, but the Metropolitan Boroughs of Lambeth and Wandsworth defeated the planners.  They were the two largest of the old boroughs, yet neither was quite large enough to become a London borough in its own right. Emergency surgery was called for, and for many at the time it was painful. Clapham and Streatham, the southern and eastern districts of Wandsworth, would be added on to Lambeth, while the small depopulated borough of Battersea would be added on to the rump of Wandsworth. 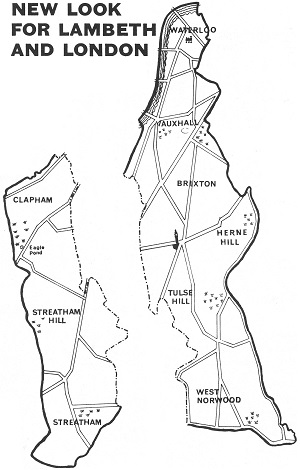 Map from 1965 showing the changes to the borough

Like all messy compromises it was greeted initially with horror, particularly by residents of Clapham and Streatham. Part of the problem was about identity and the merging of two proudly distinct parishes into a larger whole; another was undoubtedly that old English difficulty with class. Clapham and Streatham were wealthier, more middle-class areas than Lambeth – which with all the gritty authenticity of Vauxhall, Waterloo and Brixton, prided itself on its working class credentials. Consultations and public enquiries were held; the Streatham Ratepayers Association and the newly-formed Wandsworth Preservation Society (motto: “Give us your support and we will defeat the dictators in their infamous designs”) led the campaign, but by March 1963 Keith Joseph, the Conservative Housing Minister was piloting the bill through the Commons and the headline in the Streatham News said it all, “STREATHAM MUST GO”.  Councillor Green, the member for Streatham, lamented that they were “allowing a great and proud borough to slip to its doom down the slippery slope of oblivion.”

For the residents of old Lambeth it probably all meant rather less; after all they were keeping their name and their identity while their borough simply became larger. As the ‘Lambeth Serves’ booklet put out by the Lambeth Municipal Officers Guild that year noted, it “will mean a very great deal to some people and be hardly discernible by others”.

This and other stories can be found in this month’s Lambeth Talk.