Communities Minister Lord Bourne visited Lambeth Council to launch the Windrush 70 campaign. The campaign will ensure that 2018 is the year Britain celebrates the contribution of the British Caribbean community. 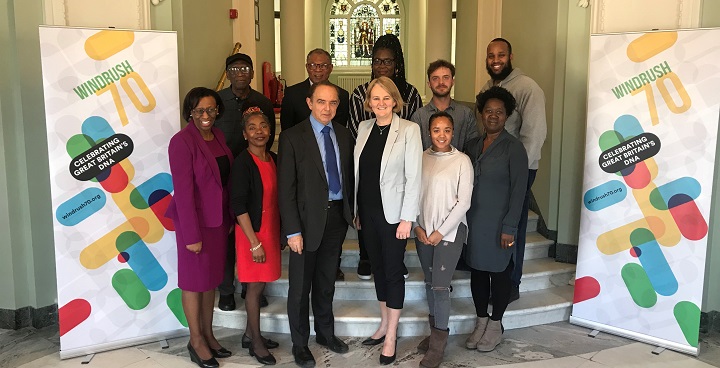 It features a new website at www.Windrush70.com, hosted by The Voice newspaper, listing events up and down the country. A Windrush70 logo has also been designed by Brixton based social enterprise design agency Champion Agency as well as commemorative pin badges.

The launch kick-starts a series of events and celebrations including performances, exhibitions and debates to take place across the year to ensure that the Windrush legacy lives on for future generations.

Communities Minister Lord Bourne said: “I am delighted to launch the Windrush 70 campaign today to celebrate the history of Britain’s black communities.

The arrival of 492 passengers from the Caribbean on the 22 June 1948 marked a seminal moment in Britain’s history. The men and women who came to Britain contributed significantly to rebuilding the country following the war and their settlement has continued to enrich social, economic, political and religious life.

Cllr Lib Peck, Lambeth Council Leader, said: “Lambeth has a pivotal role in the Windrush story and is a borough proud of its diversity and openness. I’m absolutely delighted that its young people from Brixton who’ve created these designs and hope the whole country will celebrate not just Windrush 70 but the great cultural, social and economic enrichment that the Windrush generation and subsequent migrants have brought to this country.”