Join Kennington Chartist Project to mark the 170th anniversary of Kennington Park’s dramatic place in the history of democracy and to launch a summer of events connected with 1848. 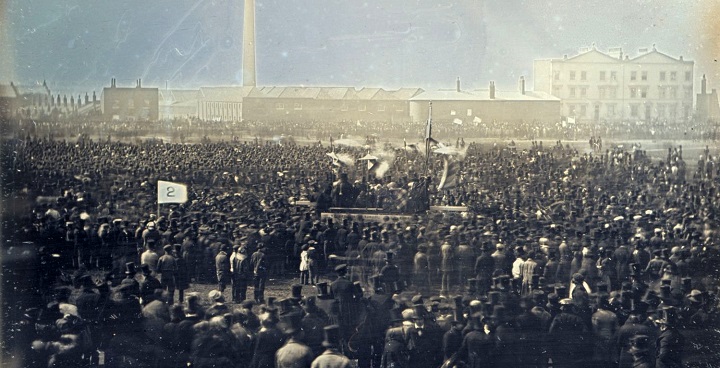 In 1848, as unrest consumed Europe, Kennington was at the centre of the fight for social justice in Britain. Tens of thousands of people gathered on Kennington Common on 10 April, demanding the right to vote.

The Chartist march from Kennington was meant to deliver a petition to parliament with 2 million signatures. The establishment sent the army onto the streets, while the Queen was evacuated to the Isle of Wight. Over 80,000 special constables were recruited to defend the capital against an expected bloody uprising.

When only those with land and property had the vote, the Chartist movement saw working people come together for democratic reform. They included inspirational figures like Anne Knight, who produced what is thought to be the earliest leaflet on women’s votes, and the radical William Cuffay, son of an emancipated slave.

On the day, the Chartist leadership was divided. Some feared a massacre and agreed a compromise. The petition was delivered to parliament by a small delegation. Violence was averted, but the issues still resonate. Fast forward to 2018 — when the news keeps reporting fears of a breakdown in democratic values: What’s the legacy of Kennington1848?

Mark the 170th anniversary, and discover a summer of walks, talks, workshops and events for all the community, to celebrate Kennington Park’s dramatic place in the history of democracy. Four flag bearers will arrive at 10.45, representing where London Chartists met and walked from in 1848.

Throughout the project the Project will build an online archive, and ask people to contribute ideas for a permanent Chartist memorial and/or future commemorations, especially the 175th anniversary in 2023.

Kennington Chartist Project is an initiative by Lambeth residents to celebrate Kennington Park’s place in history. The project draws on the skills of local artists and historians, supported by the Friends of Kennington Park, and the Heritage Lottery Fund. See their information pages, follow them on Twitter or email kenningtonchartistproject@gmail.com

For details of the free walks, talks and workshops, book via eventbrite