A Streatham-based primary school has helped to raise funds and awareness of global and local issues with their own initiated fundraising activity.  This led to them winning a prestigious award from the Mayor Boris Johnson for their achievements. To mark the success of the campaign, Chuka Umunna MP for Streatham visited the school this month to congratulate them on behalf of Streatham and to formally hand out certificates. 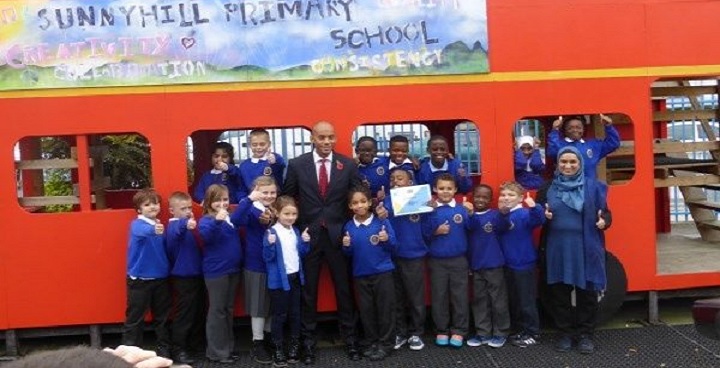 The Team London, Young Ambassadors Award was presented to three selected school council pupils at Sunnyhill Primary School.  The award recognises the way Sunnyhill actively promotes volunteer work amongst its pupils.  This achievement is particularly significant because out of 100 schools that were nominated for a Team London Young Ambassadors award, only three primary schools were shortlisted.

City Hall praised the school as being ‘an exceptional school that seamlessly links learning with citizenship’. Pupil, Isra Mohamed aged 1o says “I feel pleased that we are in some way helping to change the world by being able to do something important for others less fortunate than us. I was speechless when we won and to find out we are the only primary school in Lambeth to have this award too. I want to say a special thank you to Mrs Brooks who supported us with putting all of this together.”

Working hard for others

Pupils at Sunnyhill aged three to 12 started to fund-raise in 2012 & 2013 with enterprise days where each class supported a country in need through Free the Children. Following the ‘Adopt a Village’ initiative pupils made and sold their own products to other pupils, staff, parents and carers. Decorated jars of sweets, home-made cookies, loom bands, pizzas, face painting, cinema screenings were just a few of the enterprising ideas that helped to raise over £5000 over the last 2 years.

Sunnyhill’s school council also wanted to address local community needs and the children planned, organised, managed and even judged their first ever ‘Sunnyhill Talent Show’. They created a special food bank collecting over 1,400 items of food which they donated to the Trussell Trust.

Amarjay Nkemeayang, 10, came up with the idea for the talent show with Rotji Dandak. Amarjay said “Rotji and me thought of this idea and had to work really hard to get everyone interested and involved. We knew that the more acts that performed the more funds raised, so we had to work with the teachers to allow this to happen and even appeal to them with a peaceful protest – we wrote lots of letters to campaign.

“The skills I have learned from being part of the school council has helped me to be more friendly, work harder in lessons and even prepare me for secondary school next year. I am so proud of my school.”

Nora Mackay, also 10, who has been part of the school council for three years was invited back to City Hall with Emphraim Ngolo (aged 9) and Rotji Dandak (aged 10) to speak to over 200 teachers about the award winning campaign. She said “I was really nervous at first but excited about being able to speak about it. What we have done has helped so many other children and it feels wonderful to know that we have even made a difference in the world.”

The school is so proud of its students and their achievements

John Parr, Headteacher at Sunnyhill says, “We are over the moon with another award win this year, and also honoured that Chuka Umunna was able to visit the school. We have over 500 children at Sunnyhill and these children were 100% in charge of everything that has been achieved. The trophy is testament too, to our core school values.”

“We believe that Inspirational teaching empowers our pupils to be active citizens in their own community. We are extremely proud of our school council pupils and of everyone that supported all of the events that ultimately meant we were also able to support both global and local issues. To not only receive an award as Team London Young Ambassadors but to know that our children have learnt a great deal too about other impoverished countries and being aware that local food banks exist are critical right here on our doorstep.”