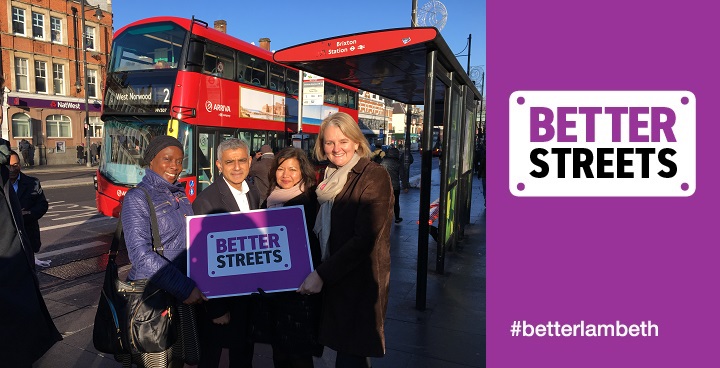 The new clean bus zone, running from Brixton Hill via Stockwell Road and Streatham High Road to Streatham Place, carries 130,000 passengers a day on a total of 450 buses on 23 scheduled routes.

From today, only buses that meet the toughest emission standards will be permitted to run within the Brixton Low Emission Bus Zone. More than 200 of the buses will be new double deck Euro VI hybrid buses. There will be 13 new single deck diesel buses and 230 buses have been retrofitted to meet a Euro VI emission standard.‎

This follows a campaign led by Cllr Jennifer Brathwaite for clean buses through the borough, starting with the most congested and polluted roads between Brixton and Streatham.

Cllr Brathwaite said: “Air pollution in our city is a killer and it is something that here in Lambeth we are determined to tackle.  We started the campaign for clean buses over two years ago and I’m delighted that this Mayor has listened and acted to improve our air quality.

“We are working hard every day to improve air quality through our borough, particularly looking at protecting our children and elderly people, and making it easier and more pleasant to cycle in Lambeth, rather than use cars.

“It’s an issue that I look forward to working ever more closely on alongside the Mayor of London.”

The Brixton zone is the second of 12 new Low Emission Bus Zones to be introduced at air quality hotspots. The first zone launched on Putney High Street in March 2017. Already, the route has seen a 90 per cent reduction in hourly pollution exceedances and early analysis suggests a 40 per cent reduction in annual NO2 concentrations at Putney High Street.

The polluted Brixton to Streatham route exceeded hourly legal levels of nitrogen dioxide on 539 occasions in 2016 and breached legal pollution limits by‎ 5 January his year. Under EU rules, the limit shouldn’t be exceeded more than 18 times in a year.‎

The Mayor of London, Sadiq Khan, said: “To tackle this lethal air we need a dramatic reduction in harmful emissions from polluting buses and older more polluting vehicles. I am committed to making our bus fleet the greenest in the world and today I’ve continued to deliver on that pledge by launching the second of my Low Emission Bus Zones in Brixton.

“I have tasked TfL with transforming the public transport network, which includes removing or retrofitting the oldest, dirtiest buses on our streets to cut harmful emissions. We’ve already seen a massive improvement in air quality along the Putney route. I’m confident that will be replicated here in Brixton and along the 10 other routes where we are introducing Low Emission Bus Zones.

“I’m working relentlessly to do everything in my power to clean up London’s air. Now, the Government needs to help tackle the challenge we face. Rather than preventing the capital from accessing the new National Clean Air Fund, ministers should be delivering a vehicle scrappage fund to get the filthiest cars off our roads. Londoners are living through a public health crisis and need a government which will take action on the toxic air we breathe.”