Turning any spot in London – however unusual – into a green and growing oasis helps to encourage wildlife diversity as well as making the environment more attractive. 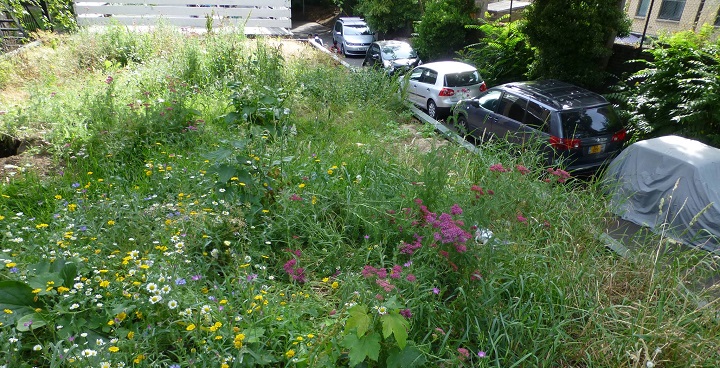 We have always worked with the tenants and resident association to get their input and the company we work with is called Green Engineers. They have done a lot of the work in getting the grants and are a local company.

From plain space to green space

Before the green roofs the roofs were just plain spaces with nothing on them. Now they are full of wild flowers, wild grasses and small shrubs.The scheme even had a mention (and praise!) in the House of Lords and we have done the scheme on the basis of budget (the roofs often work out cheaper than conventional roofs in the long term), on being good for the environment and also to provide more green spaces for residents and a nicer place for people to live.

Building a chain of green roofs

We now have green roofs at Arden House, Calais Gate, Meath House and Southwell Road on the garages. We would have done more sites, but most garage roofs aren’t strong enough to take the weight of a green roof. That is the main issue on whether a green roof can be done or not.

The roofs take from several weeks to months to build and in the case of places like Arden House had a lot of input from residents who helped build the roof on community days of action.

Do you know where a green roof could go?

If residents or tenants and residents associations want to nominate somewhere for a green roof then they are more than welcome to contact our team! Pram sheds have also been given green roofs on several estates – not by us, though. However, we are happy to look at pram shed roofs going forward and any more garage roofs that could be suitable.