HIV Testing Week runs from Saturday November 17 to Saturday 24. Lambeth offers more times and places to get tested than ever, including free home testing kits. 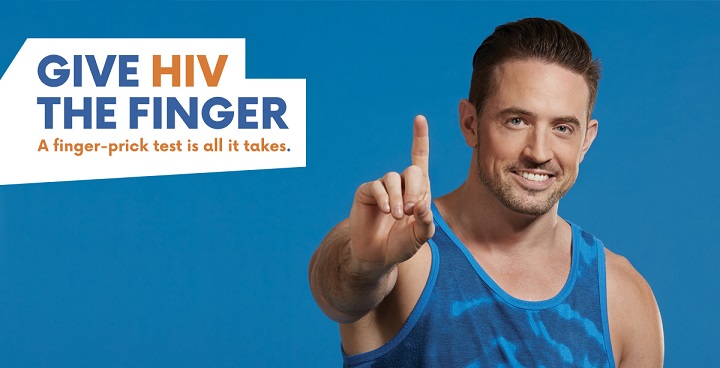 HIV Testing Week runs from Saturday November 17 to Saturday 24. The key message is “give HIV the finger”, showing that a finger-prick test is all it takes.

National HIV Testing Week promotes regular testing for people from communities experiencing a higher prevalence of HIV – including gay and bisexual men, black African men and women, and individuals who have a partner from a high prevalence country.

The aim is to reduce the rates of people living with undiagnosed HIV or diagnosed late. While advances in medicine mean that people on effective HIV treatment cannot pass the virus on, late diagnoses mean people who haven’t tested aren’t getting medical help.

Public Health England (PHE) figures show that HIV testing weeks are having an impact in the UK, with a 21.8% drop in the number who don’t know they are living with HIV. But a small increase in late diagnoses between 2015 (39%) and 2017 (43%), means testing is as important as ever.

Cllr Ed Davie, Lambeth Council Cabinet Member for Health and Adult Social Care, said: “Earlier this year Sir Elton John singled out Lambeth Council for praise on the work we have done to improve sexual health. But we are not complacent and must go further which is why we fully support HIV testing week. The high visibility of the campaign helps, longer-term, to reduce the stigma of living with HIV. We know now that the virus can be contained, and we believe that testing and education are an essential part of our goal of eradicating HIV from London by 2030.”

In 2017 key public health bodies including the US Centre for Disease Control and UNAIDS officially confirmed that people with undetectable levels of HIV cannot transmit HIV. Lambeth is part of the Fast Track Cities initiative – a major push to reduce the rate of HIV infections and eliminate stigma in London – aiming for zero new HIV infections in the capital by 2030. Lambeth’s award-winning Do-It London campaign has taken a lead on “Undetectable=Untransmittable”, or “U=U” – which is also the World Aids Day message for December 1 2018.