Holiday Hunger – a day of ideas

The Holiday Hunger conference in Stockwell brought together practitioners and funders to look for a common approach to reducing the number of children left hungry in school holidays. 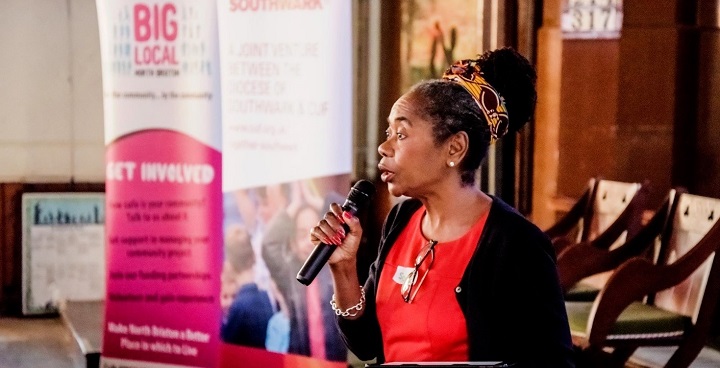 It’s ironic that at a hunger conference we were surrounded by a mountain of foods donated by local businesses. And humbling to see that mountain reduce as local people wandered in to take some away.  Many take it for granted that children are well fed in our developed country. We’ve never opened our fridges or cupboards and found nothing to throw together for a decent family meal. But just think what a lonely place children must be in when they’re unable to focus on anything but their hungry stomach.

The government addresses hunger with school dinners, but what happens when schools are closed?  Seeking solutions to Holiday Hunger isn’t new – many organisations and individuals in our community realise the far-reaching effects hunger has on growing minds.

Cllr Sonia Winfred, Cabinet Member for Equalities and Culture, spoke about her passion for the subject and asked communities to fill in the gaps.

She said: “Initiatives will only succeed if communities buy in and play their part.”

This conference was organised in partnership with the Big Local, Together Southwark and Lambeth, who look to share solutions with neighbours Southwark and Lewisham.  Chair of the Big Local North Brixton, The Revd. Canon Dr.  M. Rosemarie Mallett, called for practitioners, providers and agencies to … “Unite efforts in tackling hunger problems for the good health of our future generations”.

Leading practitioners talked of different approaches. The Trussell Trust led the way with their national approach. Closer to home, the Norwood and Brixton Foodbank spoke about trying to reduce the stigma around food banks. Delegates passionately described earlier initiatives shelved due to funding cuts.  But by the end of the day, delegates had collated valuable information on the surprising number of resources available, work already done, and gaps.

The conference achieved its main objectives – connecting with enthusiastic people and organisations who are ready to take action; gathering information to map existing provision, and being reminded of work still going on in the community. Our challenged is to ensure “no hungry child this summer”.