Congratulations to all of those shortlisted in the Lambeth Community Awards 2015 and this year’s winners! Results were announced at a prestigious ceremony at the Southbank’s Royal Festival Hall on 22 September. 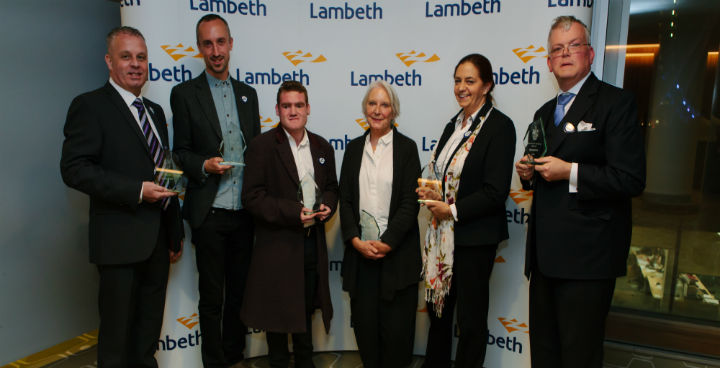 He said: “I was incredibly inspired at the Community Awards – these people that we recognised are champions of the borough.  Their selflessness and commitment are commended and we can all learn from them.

“Lambeth would not be the wonderful place it is, without people like this and I thank them from the bottom of my heart.  These people have made our lives beautiful and meaningful.”

Bringing your neighbourhood together award

Rob is a resident of central Brixton, he provides support for vulnerable people, liaising on their behalf with the council, doctors and landlords. He helps with the shopping, and introduces them to each other so there is a mutual support network. Rob campaigns to keep the area clean, green and tidy.

Andrea provides dance classes for people with learning disabilities. The weekly dance classes are a chance for the attendees to improve their physical health and to build self-confidence. The group performs in a theatre once a year – which takes a good deal of organising, and they also perform at the Lambeth Country Show.

Wayne volunteered at the West Norwood Feasts, ran a Trade School growing edible flowers, and has helped local residents with their gardens. For the past year Wayne has dedicated a vast amount of time on a new project called the West Norwood Bzz Garage. He approached the garage and got their permission to transform the space with attractive bee-friendly plants.

Ten years ago Kathleen Staniford joined the Lambeth South Volunteer Police Cadets as a cadet leader, and has done a truly inspirational job. Her connections with the Latin community have helped with recruitment and the cadet force has grown from 30 cadets when she joined to having 122 cadets in three units today.

Matthew works as a volunteer for Whippersnappers during the week, bringing children from local schools to their inclusive afterschool facility at Brockwell Lido. He has completed courses at Lambeth College and is a Prince’s Trust Award holder. On his weekends
he helps at Rattray Road Play Street which is a local organisation providing safe play for local children, bringing communities together.

Voluntary or community organisation of the year award

Quotes from our winners

“I’d like to thank everyone involved with Bzz garage, who turned out in the sun and the rain to cultivate a windy corner of West Norwood which is the bus garage. I’d also like to thank Lambeth Council for their visionary work as a co-operative council and in particular their support for the Open Works programme in West Norwood, without which this project and several others wouldn’t be supporting thriving communities. I’d like to use the words from the US scientist Margaret Mead ‘Never doubt that a small group of thoughtful, committed citizens can change the world, indeed it is the only thing that ever has’.”

“Thank you very much, this award would not happen without my young cadets and my young pupils. I’m being awarded for doing what I love – working with young people.”

“I would like to say thank you to everyone in Lambeth. Having a learning difficulty and trying to be understood in the world is not easy. It means a lot to be the Co-chair of Lambeth Learning Disability Assembly and part of L’Arche, which was set up by a man called Jean Vanier and his dream was that people with learning difficulties can do what I am doing now which is living in my flat and being able to live a normal and able life.”

Sign up to the Love Lambeth email newsletter to get the latest stories direct to your inbox.