Lambeth’s Sports Services are starting a three-month programme to repair and upgrade sports facilities including tennis courts, netball courts and Multi-use Games Areas (MUGAS) in parks across the borough. 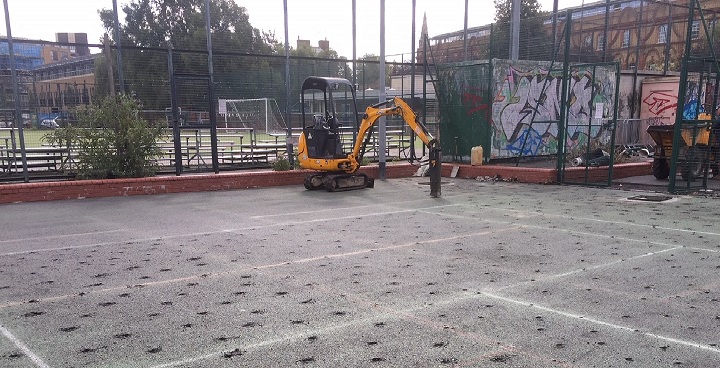 Now, Lambeth’s Sports Services have begun a programme to repair and upgrade sports facilities in parks all over Lambeth, ready to meet even more public demand. The programme includes works to improve tennis courts, netball courts and Multi-use Games Areas (MUGAS) for football, and basketball players. Our facilities will be safer with non-slip paint, anti-flooding and frost-resistant surfaces, and some will be upgraded to improve accessibility.

Kennington Park’s tennis courts are the first for refurbishment, with work scheduled to begin on Thursday 6 September. 62,000 people played tennis in Kennington Park in 2017/18. All works in the programme are scheduled to end by early November.

To tie in with these physical improvements, Lambeth will develop affordable tennis programmes to support the borough’s Active Lambeth Plan outcomes, hopefully inspiring more people to use the sports facilities.

Chris Norris, from the Friends of Ruskin Park – where hundreds of people use the tennis courts – said: “Tennis is a popular activity in Ruskin Park for both children and adults, and we’re delighted to see the refurbishment of the courts. We look forward to working closely with Lambeth Council to secure further investment in the park for the benefit of local people’s health and wellbeing.”

For more about the works programme, and about the sports available, contact the Service by email.