Focus on Norwood - News and announcements

Local school researches history of resident whose memorial was lost and is now being restored – on the centenary of her death. 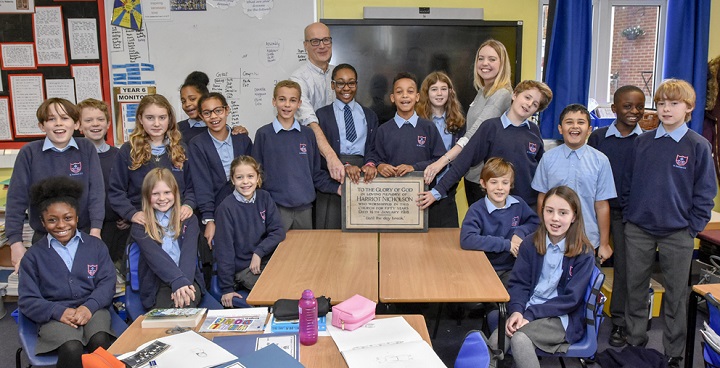 A special project working with St Saviour’s Primary School, Herne Hill, led by Lambeth Archives and the Friends of Carnegie Library is working to restore 24 memorials to local people that have been lost to view for over 30 years.

St Saviour’s Church was demolished in 1981. Memorial plaques were taken down and stored in the basement of Carnegie Library alongside plaques from All Saints Church, South Lambeth. These included memorials from the Boer War and both World Wars.

Following the recent excavation of the Carnegie Library basement, and ahead of the building’s reopening this week, pupils of St Saviour’s have had the chance to learn more about their local area through some of the stories from these plaques.

The exciting project will restore a memorial to former Herne Hill resident Harriot Nicholson along with 25 other memorials. Local Residents from the Friends of Carnegie Library and staff from Lambeth Archives are securing funding to restore the stone and brass memorials. They are working with local conservation specialists, Taylor Pearce and City and Guilds of London Art School. The restoration project includes workshops about conservation, research, and community memory. At the end of the project it is hoped that the fully-restored memorials will go back on display.

Harriot Nicholson died in January 1918. Exactly 100 years later in January 2018, her memorial returned briefly to the site of St Saviour’s when the Year 6 class took part in a session learning about Harriot’s and family, and found out about life in Herne Hill from 1870 to 1918. They learned that she lived on Minet Road for most of her life, and that she was married at St Saviour’s Church in 1870 and her two children were baptised there. Then, just four years later, she was widowed at 39 when her husband died in South America.

One story among many

She lived through a period of great change in South London. The story of her widowhood with two young children at such a young age can still touch us now. At her death aged 83 the stone plaque was erected in her memory, when it was fairly unusual for such a memorial to be dedicated to a woman. The uncovering of her story helps to demonstrate the value of conserving and understanding such memorials. Harriot’s story is just one of many, and the project will highlight the different ways in which communities remember friends and loved ones.

For more about Lambeth Archives see their information pages