Neighbours, children and shop owners joined Rymer Street Champions in creating planters to help combat litter and make their street look and feel good as part of a bigger community. 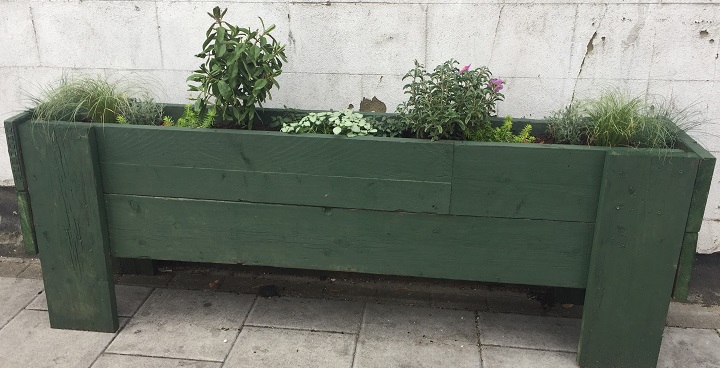 Love where we live

“We love where we live. It’s great being over the road from Brockwell Park with good pubs, restaurants and shops nearby. But over the past years our street became a fly tipping hot spot. Temporary CCTV meant Lambeth were able to take action against offenders, but fly tipping resumed when the camera was removed.

“We met Ismail Djema of Street Champions, to find out what support was available. Ismail gave us signs to put on lamp posts to deter littering and we talked through the underlying problem of rubbish not being correctly disposed of. Following our request as Street Champions, a new public litter bin has been placed on Dulwich Road.

“We decided to get neighbours together and construct planters along the pavements – the hope being that, as well as improving aesthetics, we’d be able to deter offenders. For a small street, we had a great turnout. Neighbours, children and shop owners came out in force to help build, paint and plant five planters which look great!  Lambeth supplied wood, paint, soil and tools. Kevin Abbott of Croxted Road Garden Centre was extremely helpful in advising what plants would work best and generously donated grasses and plants.  The planters perfectly complement those around the corner in Station Square, making the area feel like one community.

“We already have another date in the diary to get neighbours together to build two more planters. We plan to plant bulbs/flowers around trees on the pavements; we’re looking into how to replace trees that have died. We’re looking into organising a “Play Street” day to get young families on the street together and have a safe area for our kids. The Street Champions project is a great way to come together as a community and improve where you live. We’re hoping in time the planters will have the desired effect of deterring fly tippers for good!”

To find out more about Street Champions and maximising community spirit where you live, see our information pages