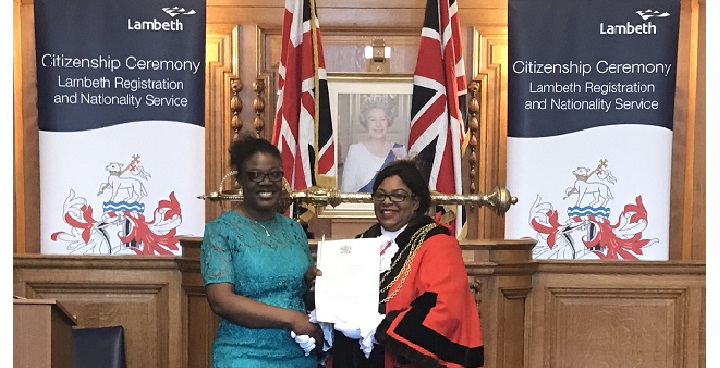 An honour to welcome new citizens

More than 50 people gathered in the Council Chamber at the group ceremony presided over by the Mayor of Lambeth, Cllr Marcia CameronCllr Cameron said to the new British citizens: “It’s an honour for me to welcome our newest citizens to Lambeth. I hope that you all now go on to achieve your hopes, dreams and aspirations in this proud country.”

The ceremony (which is for those whose application for British citizenship is approved by the Home Office) concluded with the national anthem in front of a portrait of the Queen and two Union flags. The event was an opportunity for applicants to celebrate their new citizenship and for the council to celebrate the borough’s cultural diversity. It is hoped that the ceremonies encourage new citizens to play an active part in the community

People who take part are presented their certificate of naturalisation which confirms they are now British. Among those who became citizens on Friday were Maureen Madrid and Laurencia Kwanga.

This was the first citizenship ceremony in the refurbished Council Chamber. Historic features from the start of the 20th century have been sympathetically restored. The town hall refurbishment is part of a wider project to reduce Lambeth council’s core office buildings from 14 to two, saving at least £4.5m a year. It also includes the creation of 219 new homes for rent and sale, of which 47 per cent will be affordable.

For more on the regeneration of your new Town Hall and other developments in Brixton see the council’s web pages.