A key mile-stone in the creation of new homes in central Brixton as part of the Your New Town Hall project has been reached.

A ‘topping out’ ceremony was held for Brook House in Brixton Hill to celebrate reaching the highest point in construction.

The site used to be Hambrook House which was the offices for Lambeth Council’s housing teams. Hambrook was demolished as the council moves from 14 building to two which will save £4.5 million a year. 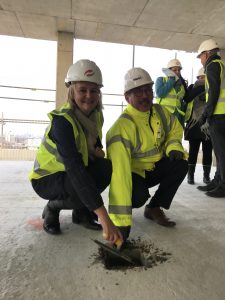 When finished its replacement, Brook House, will have 48 affordable homes including 34 homes at social rent, as well as 46 private apartments. On the new ground floor there will be a shop or café that faces both Brixton Hill, and the entrance to the next door building – which will soon be the council’s new Civic Centre.

Notting Hill Housing, one of London’s leading housing associations will own and manage the 48 affordable units.

Brook House is part of Lambeth Council’s Your New Town Hall scheme which will see an multi-million pound investment into developing 219 new homes, 47 per cent of which will be classed as affordable homes.

Cllr Paul McGlone, Deputy Leader of the Council, said: “The housing crisis in Lambeth needs direct action. These homes are an important step towards our plans to build 1,000 new council homes.

“We are using the land we own, investing big amounts and running new housing schemes all over the borough to deliver on this pledge.”

The new Brook House will be finished in September next year when families on Lambeth’s waiting list will be able to move into a new home. A second former council office on the site called Ivor House which faces onto Acre Lane will feature another 26 new flats and be finished at the same time.

Muse Developments is the council’s development partner on the project and the main contractor for this phase is Galliford Try.

James Stockdale, senior development manager at Muse Developments, said: “This is a key milestone in the delivery of Brook House and the wider Your New Town Hall scheme, which is providing much-needed housing and commercial space alongside the refurbished Grade II listed Town Hall and new energy-efficient civic office.

“The project is a true partnership and we have been working closely alongside the Council to deliver this important development for Lambeth which will transform the area around the town hall into a vibrant community with new places to live, work and visit.”