Canterbury Square – we need your feedback….

Focus on Brixton - News and announcements

The new public space aims to create a social, attractive and relaxing space for local people, and visitors to Brixton. The design aims to be environmentally friendly with new shrubs and tree planting and materials such as self-binding gravel which will reduce the amount of surface water entering the drainage system. 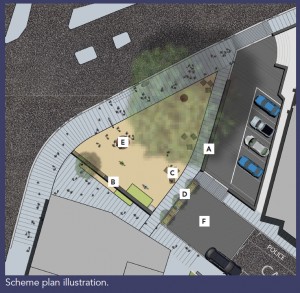 A new low stone wall (A) will replace the police station boundary wall as this is in a poor state of repair. A second wall (B) will be introduced to create a new secondary space next to the funeral parlor. Both of these walls will be low enough to sit on. Several single seats will be introduced to allow people to sit comfortably in the space, either on their own or in small groups (C). Some additional cycle parking stands and a cycle pump will be installed, along with a dropped kerb to allow cyclists to continue to cut through to Canterbury Crescent (D).

A new artwork (E), by local artist Ian McChesney, is proposed within the space to mark the route of the River Effra, which flows beneath the space on its way through Lambeth to the Thames. The artwork is envisaged to be cast iron to reflect the manholes and sewers used in Victorian times to culvert rivers. The artwork will be raised from the ground, becoming a focal point that people can lean or sit on and of course children can play on. A smaller version of this piece can be replicated throughout Lambeth to mark the points where the Effra runs beneath the borough. 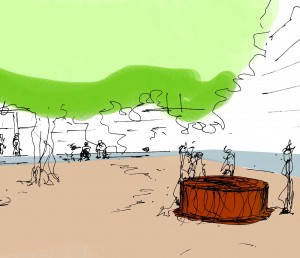 To create the new public space, we plan to restrict vehicle access into the part of Canterbury Crescent with double red lines and the turning head and create a new turning area further south (F). There will be no overall loss of parking along Canterbury Crescent but bays may be modified to accommodate the requirements of the new design.

We want to hear your views and feedback on the proposals. You can fill in the questionnaire here and we need all feedback by March 21st.