Plans for hundreds of new homes and jobs approved

A Grade II listed gas holder will be dismantled, restored and put back up as part of a new scheme in Lambeth that now has planning permission for 738 new homes, work space and new public landscaped areas. Thirty-five per cent of the new homes will be affordable. 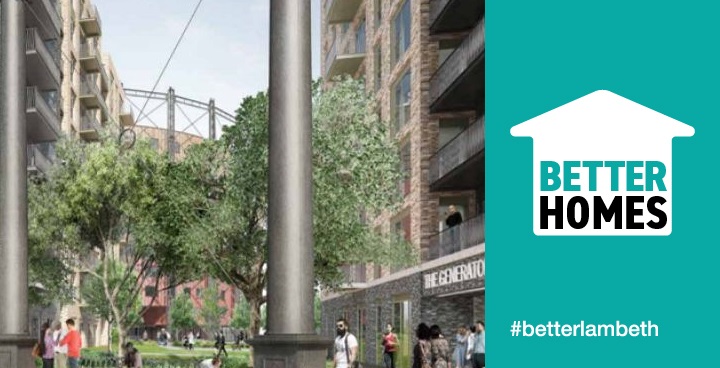 The redevelopment of the brown-field site in Kennington will feature 100,000sqft of commercial space which could accommodate 1,000 new jobs. There will also be more than 5,000 construction jobs created through the course of the development with a focus on jobs for local residents in Lambeth.

The project will see the decontamination of former industrial land, which has been restricting other development around the site off Kennington Lane and Vauxhall Street, which is within walking distance of Vauxhall tube.

The Oval Gas Works site redevelopment application was made by Berkeley Homes and approved by Lambeth Council’s Planning Applications Committee on Tuesday (June 12) during a meeting at Lambeth Town Hall in Brixton. The application follows lengthy discussions with the council for the redevelopment of the wider area under the Oval and Kennington Development Area Masterplan, the principles of which were endorsed by the council in December 2017.

Cllr Matthew Bennett, Lambeth Cabinet Member for Planning, Investment & New Homes, said: “Bringing this polluted, largely vacant land into use for desperately needed new homes, as well as new offices and public spaces, delivers major benefits for the both Kennington and the wider borough. This significant piece of land will be integrated it into the local neighbourhood for the first time in 150 years. Nearly 200 of the new homes built here will be for genuinely affordable and social rent, as we use all our powers as a council to tackle the housing crisis.

“This is a really positive step for the borough, and demonstrates our commitment to make growth and investment in Lambeth work for local people.”

The listed gas holder on the site will have a new block of flats built within its frame. Other gas holders on the site are being decommissioned as part of a nationwide strategy to remove them because they’re no longer needed. The latest technology means gas is more efficiently stored under pressure in the pipe network making the holders redundant.

The Greater London Authority has been consulted and backed the principles of the scheme.

The Generator, a flexible co-working space for new businesses will be developed on the site, and it will also include new community space. There will be new pedestrian and cycle routes opening access to the site for the first time, as well as the creation of safe streets for pedestrians and cyclists.

The project features high-quality architecture, with building heights between four and 18-storeys that respect local and strategic views, and there will be major improvements to key street frontages in the area and community contributions from the developer worth £9million. The preparation of community plans and development of a cultural strategy for the site will now follow.