Lambeth is experiencing criminal vandalism of the signage and community plantings at its emergency Low Traffic Neighbourhood schemes which are in place to maintain a safe street environment, support green transport options and improve air quality. 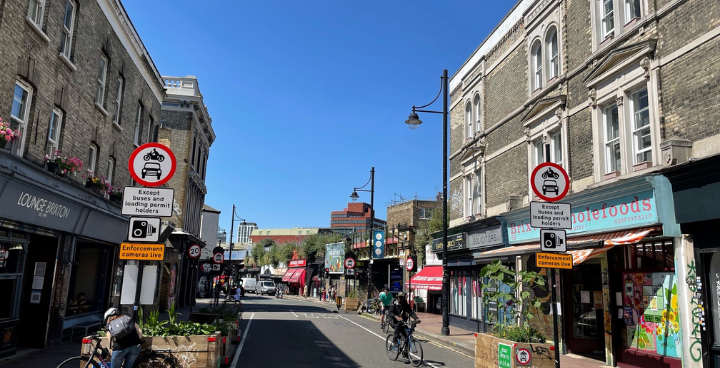 A series of measures are now being put in place to tackle the issue, including extra CCTV, more council patrols and extra police visits. The council will also seek to prosecute those committing vandalism.

Lambeth Council has written to residents, thanking those who have reported the damage and to highlight that anyone who has a concern about the issue should email lowtrafficneighbourhoods@lambeth.gov.uk.

It has cost the council money to replace damaged signage, cameras and other equipment. Additionally residents who have sowed plants and flowers at their own expense have in some cases seen them cut down or torn up.

Cllr Danny Adilypour, joint Cabinet Member for Sustainable Transport, Environment & Clean Air, said: “People are entitled to express their views over our Low Traffic Neighbourhood trials, but there is no excuse for acts of criminal vandalism which put our residents at risk and this is not an effective way to engage with the council or fellow residents.

“Residents who oppose the schemes or would like to see improvements have many ways to constructively engage with the council, and we’re actively seeking their feedback. Vandalism poses a danger to the public, is criminal and will be treated as such.”

The five schemes are all currently in a trial period under Experimental Traffic Orders to understand how they impact traffic movement. Vandalism to the schemes could extend the trial periods and delay the planned public consultations.

Cllr Adilypour said: “We know our emergency Low Traffic Neighbourhood schemes have generated a healthy debate and we are grateful to all of the residents who have engaged and worked with us on this so far. The consultations will give everyone a chance to have their say in a fair, reasoned way.

“We encourage you to continue to share information with us and we thank you for your diligence to helping to keep everyone safe.

“Collectively, we can build a greener street environment that tackles the climate crisis, where cycling, walking, using a wheelchair, rollerblading or any other active mode of travel feel like comfortable and viable options for getting around.”

You can sign up for updates on the project and get in contact with the team via the lambeth.commonplace.is/.