Making streets better: new ‘Not on Our Street’ poster campaign

The latest ‘Not on Our Streets’ poster campaign spells out the Council’s legal right to fine lawbreakers for anti-social behaviour including offences such as dog fouling, fly tipping, littering, spitting or urinating. 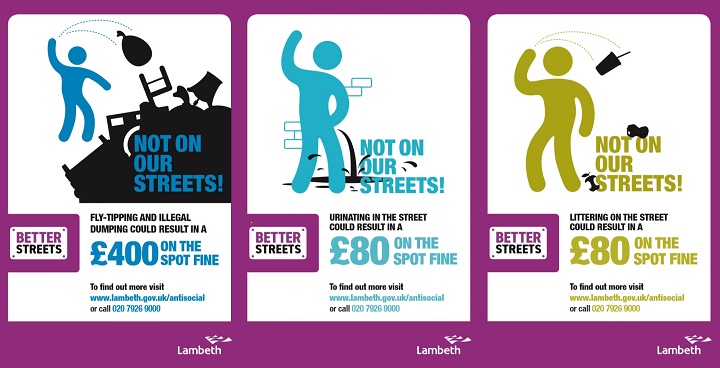 We’re getting the ‘Not on our streets’ message across. Most fixed penalty notice fines (FPNs) are now £80 and posters everywhere mean no excuses for anti-social behaviour. Three new Enforcement officers have recently been appointed to deal exclusively with fly-tipping across the borough.

Illegally dumped rubbish costs Lambeth over £140 per tonne. Enforcement Officers often rely on residents for evidence to prosecute. But if they catch a fly-tipper in the act, the fine is £400 instantly. When it goes to court, offenders may have to pay £50,000 (magistrates’ courts) or unlimited fines (crown courts), plus community punishment orders or up to 5 years’ prison.

Leaving dog mess in any public place is an environmental crime. Council Environmental Crime Enforcement Officers will fine owners who don’t scoop poop £50 on the spot. Dog owners taken to court can be fined up to £1,000.

Litter can make any street look unloved and rundown, so getting caught dropping litter on the streets deserves its on-the-spot fine of £80. It costs the Council over £5million a year to clean up after people who litter your streets.

Emptying your bladder on our streets is unpleasant for Lambeth’s residents as well as illegal. The Council and local businesses welcome visitors to Lambeth for a night out – but use the loo before you go home, or risk an £80 fine for illegal anti-social behaviour.

Cllr Jennifer Brathwaite, Cabinet Member for Housing and the Environment said: “Lambeth is very serious about tackling environmental crime. That’s reflected in our appointing more Enforcement officers to tackle littering, fly tipping and dog fouling and the increase in the number of fines being issued. This year we’ve issued over 3,500 fines for anti-social behaviour on Lambeth streets – including a £5,000 fine for one offender.”