Not on our streets!

Lambeth Council is warning people that antisocial behaviour on the borough’s streets will be met with on-the-spot fines of up to £80. 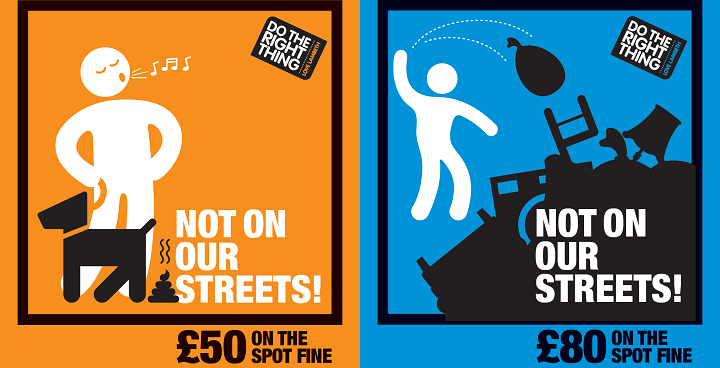 Under new powers which came in last year, we can issue on the spot fines for anybody in Lambeth seen damaging the environment by spitting or urinating in the street, failing to clear up after their dog, fly tipping or littering.

Making it easier to tackle ASB

Lambeth’s cabinet member for Environment and Sustainability, Cllr Jennifer Brathwaite, said: “Our ‘Do the Right Thing’ campaign encourages residents to act in a responsible way to help make Lambeth a clean, pleasant and safe place to live and work.

“While the majority of residents already do this, a small minority are damaging the borough, polluting the streets, causing offence and costing the council money to clear up after them. We are now saying; ‘Not on our streets’.

“These on-the-spot fines will make offenders think twice about doing it again and protect our streets for our responsible residents.”

Posters are being put up around the borough warning people about possible fines and a new enforcement team will begin work later this summer.

Last year council officers issued nearly a thousand Fixed Penalty Notices (FPNs) for antisocial behaviour, with almost half of those for littering.

In October, Lambeth issued its first FPN for spitting under current anti-littering legislation, resulting in a £120 fine after the case went to court.

There are already hundreds of people taking up Lambeth’s Do the Right Thing challenge; making the borough a better place to live and acting as role models for others to follow.

Not on our streets campaign

1 Thought on “Not on our streets!”