Mayor Wellbelove invites the Pokemon Go community to come together – and Lambeth is believed to be the first to host a formal Town Hall reception for players. 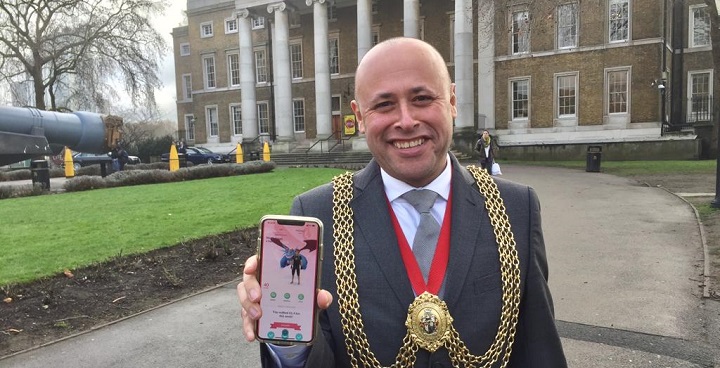 Along with being Mayor of Lambeth, Councillor Christopher Wellbelove is also a big fan of Pokemon Go.  Like many people, he started playing the game as a way to get more exercise. Unlike other smartphone games, Pokemon Go requires you to travel to landmarks, tube stations etc to capture the monsters. Many players have noted health benefits from the travel.

The Mayor said: “There is a lot of misunderstanding about the game and its players – a form of prejudice – and people in the past have said to me “how sad” they think the game is.” The reception hopes to help change that prejudice.  More than 100 people have already signed up and the Mayor will be running a tournament in the council chamber which will raise money for local mental health charity Mosaic Clubhouse. Mental health and suicide prevention is the key theme of Christopher’s year as Mayor of Lambeth.

“What I have seen is that Pokemon Go has created a community of players who come together to play the game and from this have built real-life friendships. The community is incredibly diverse and it is great that the game brings together people who otherwise would probably not socialise.”