Lambeth Council has received a Silver Employer Award from LGBTQ+ Rights campaigning charity Stonewall for our ongoing commitment to becoming an LGBTQ+ employer. 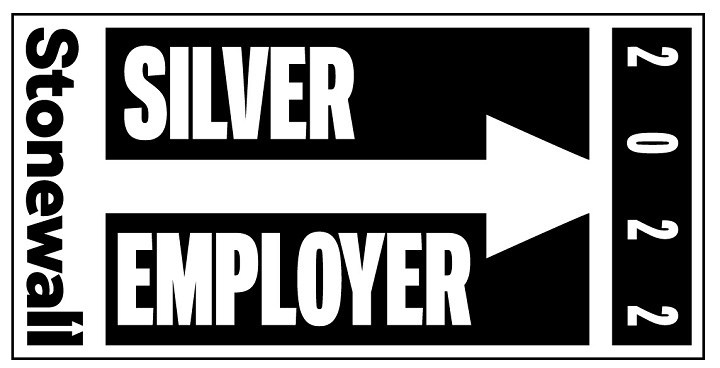 For many of us, our jobs are part of who we are and form a fundamental part of our sense of self. That’s why making workplaces inclusive for lesbian, gay, bi, trans and queer people has such a life-changing impact. From the bi person who doesn’t feel able to come out to his colleagues, to the lesbian who wants to know whether the family policy applies to her, to the trans woman who doesn’t feel able to be her full self at work – having clear policies and support from your workplace can mean the world to LGBTQ+ staff.

Despite the challenges of the last couple of years, employers including Lambeth Council have worked to support their LGBTQ+ colleagues during such a difficult time – and now Stonewall want them to celebrate it. Lambeth Council, serving the borough with the largest LGBTQ+ community in London within a diverse population of more than 325,000, has received a Stonewall Stonewall Employer Award for our inclusion of lesbian, gay, bi, trans and queer people in the workplace. Silver recognises Lambeth’s successes in each of nine essential categories – policies, official statements of LGBTQ+ support and inclusion in recruitment and training and an active Council-wide commitment to Equalities, Diversity and Inclusion.

Cllr Sonia Winifred, Lambeth Council Cabinet member for Equalities and Culture said: “Since March 2020, almost everyone in the workplace has seen their daily routine changed and faced being distanced from colleagues and support networks. It’s inspiring to see this recognition from the UK’s leading equal rights organisation that Lambeth is moving forward with working to support LGBTQ+ colleagues and the wider LGBTQ+ community in these difficult times.”

Stonewall has also published its annual Top 100 Employers List, and awarded Gold, Silver and Bronze awards to organisations to celebrate their inclusion work. Although still working towards a place in the Top 100, Lambeth improved to well within the top 200 out of 400 organisations who entered, and won Silver for new work on inclusion.

Liz Ward, Director of Programmes at Stonewall said: “It’s fantastic that Lambeth has earned a Silver award for commitment to creating an inclusive work environment, and we look forward to seeing and supporting their inclusion journey.’

“We spend so much of our time at work, and our career can be a huge part of how we define ourselves. Every single lesbian, gay, bi, trans and queer person should be able to be themself at work. From understanding how HR policies, such as parental leave, will affect them, to being reassured that they can speak openly about their lives and partners at the coffee machine, the impact of inclusive workplaces can be life-changing”.

Stonewall is the UK’s leading charity for lesbian, gay, bi and trans equality, founded in 1989 by a small group of people who wanted to break down barriers to equality. Stonewall continues to campaign on LGBT Equality, as well as work with employers and schools to create environments which allow LGBTQ+ people to thrive.