The bin’s the thing 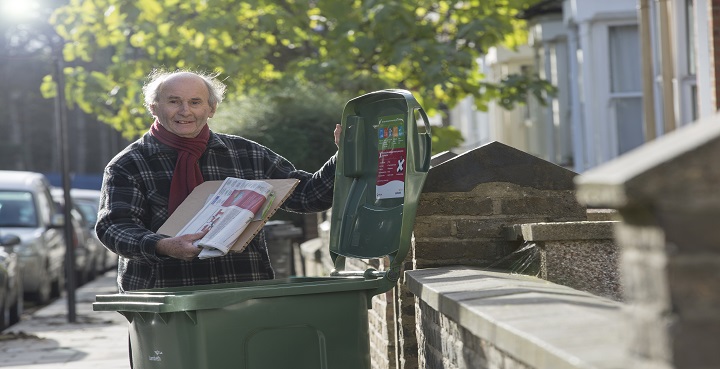 “I got into being a Street Champion after getting involved in a Community Freshview. It’s a good way for the council to hear about local problems from people facing them.

Clearing up the problem

“I’ve tried suggesting leaving recycling sacks on the wall,  or on top of their rubbish bin, if possible, to be out of reach of animals. I’ve done education about what people can recycle, and gentle reminders that they should rinse out everything that’s had food in it before putting it in the recycling sacks. If you don’t, the smell of food attracts the foxes and they just tear the plastic open. It makes such a mess.

“I’ve seen the recycling sacks get used for rubbish and garden leaves, which must be a real waste of a free service. And spilled recycling on the street can quickly attract fly-tipping.

“As soon as I heard about the new bins I said “fantastic”. I couldn’t be happier. They’ll hold more recycling, and keep it safe from foxes.  I think it will be better for the recycling contractors , too. With the sacks, they have make an extra trip picking up all the spilled recycling off the street.  With the bins, they’ll be able to do everything in one go.”

Bins on a roll

New green recycling wheelie bins are being delivered across Lambeth from mid January to the end of February.

Some homes will not be suitable for the new green recycling wheelie bins and will still use sacks. We’ve written to tell you whether you’re part of the new 3-bin system.

7 Thoughts on “The bin’s the thing”