A day in the life of our flytipping collection crew

Our waste teams work tirelessly to keep the borough clean and tidy – but it’s a non-stop challenge – as Street Champion Robin found out when he joined a crew on their daily round. 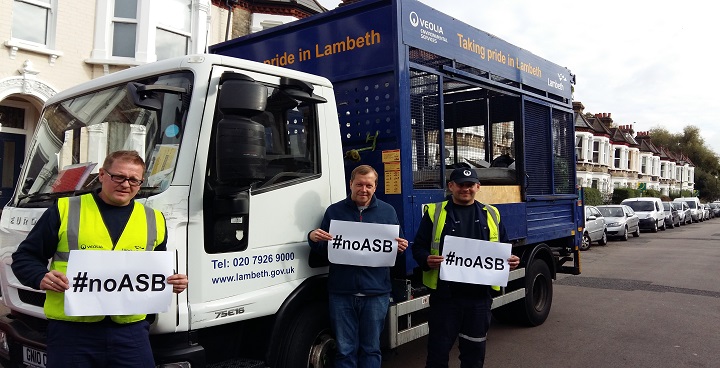 A day in the life of our collection crew

Bart and Piotr start their round at 6am each morning and collect waste which has been dumped illegally on our streets.

“We cover the whole area of Brixton, we’re the main truck removing fly tipping from the streets. Sometimes we can fill our cage in just one hour; we sometimes do as many as four loads of fly- tipping a day.”

Many residents in Lambeth do the right thing and put their rubbish and recycling out on the right days – but there are some people who irresponsibly dump rubbish – leaving the council to clear up after them.

“Some residents are very thankful. We like getting praise from residents, it makes us realise what we do is worthwhile. When some residents see us clear the fly tipping, as soon as we’ve gone, they put more items back where we have just been.”

The role of a Street Champion

Robin explained that through his role as a Street Champion he’s helping to tackle fly-tipping in his local area.

“What I currently do at this moment is report fly tipping. The majority of local people are considerate but some others need to be educated. I think it’s important to educate people on things such as recycling in a fun and informative way.”

“In an ideal world I don’t think there should be a need for street champions, people would tackle issues themselves or better still not do things such as fly-tip onto our streets. I would say that the majority of people who I’ve encountered and who live on our streets are great. My neighbours are involved in the Freshview initiative”

What can you do to help?

Each tonne of illegally dumped rubbish costs us £140 to deal with; money that could be spent on improving your services. Our officers constantly control the borough and aim to investigate and remove any dumped waste within four days but we need your help!

You can use our online flytipping reporting form to let us know about fly-tips in your local area. To catch offenders we need as much information as possible, for example a description of the people involved, registration numbers and photographs.

Street Champions are everywhere. They’re the people who check on elderly neighbours when the weather’s cold; who take parcels in when the recipients are out; who care about their street and want it to be a clean, safe and neighbourly place. If you feel that you could make a difference, you can find out more and sign up on our Street champions page.

Let us know what you think

Robin was invited to experience a day in the life of our fly-tipping crew by Lambeth’s Environment Performance and Development Team. They work closely with frontline staff and residents to overcome issues and provide the best possible service. They’d really like to hear your views on this article and find out what you’d like to see featured in future articles. You can comment by completing their short feedback survey.