Amphibian art from the street to the park

Lambeth’s Ruskin Park is home to a restored pond and an amazing new mural celebrating the wildlife living there. 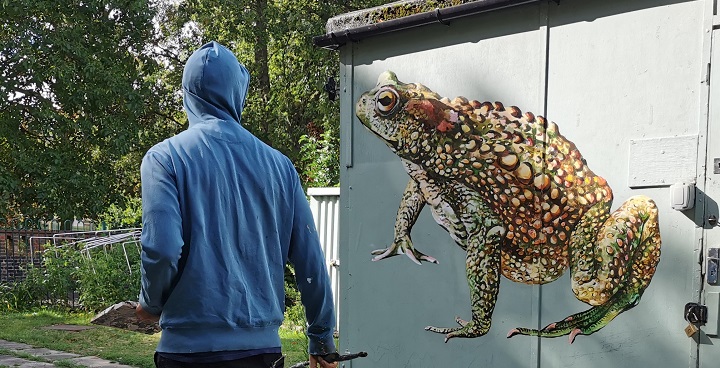 World-World-famous street artist ATM  – known for large-scale wildlife pictures on urban walls, and by his tag –  has unveiled his first amphibian. It’s for nature conservation charity Froglife and it’s in Lambeth’s Ruskin Park.

Painting with brushes and acrylics rather than traditional urban spraycans, ATM submitted sketches for a 2 metre by 1 toad when Froglife’s London T.O.A.D (Tails of Amphibian Discovery) project started in 2017. Once Froglife completed pond restoration works, the sketch became a mural on the side of Lambeth Council’s highly visible in Ruskin Park Volunteer Cabin. 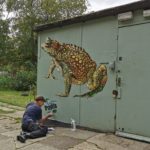 ATM said: “Toads are remarkable and fascinating creatures,  and communicating by live-painting can have a lasting impact. My art of endangered species aims to captivate an urban audience so they want to actively support the regeneration of natural abundance, to inspire the younger generation to value and cherish the natural world, so they want to protect its scope and profusion. As London experiences massive building development it’s vital we create areas of focused value for wildlife. The more ponds we create, the more we ensure London’s biodiversity and health. Froglife’s ponds do precisely that, creating ideal conditions for toads and countless other creatures.”

Dr Ian Boulton, Lambeth Environmental Compliance Officer, said: “We’ve always enjoyed a productive relationship with Froglife in improving our parks and open spaces so they are better for biodiversity and people’s access to nature – London T.O.A.D is no exception.”

Art in the park 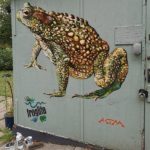 ATM’s giant toad is Froglife’s third artwork in London parks. “We all know the health benefits of being out in nature and the inspiration that art can bring. Froglife has a history of combining both, “ said Emily Millhouse, London T.O.A.D project manager.