A ribbon cutting ceremony was held today for the re-opening of Lambeth Town Hall following an 18-month restoration of the Grade II listed building in the heart of Brixton. 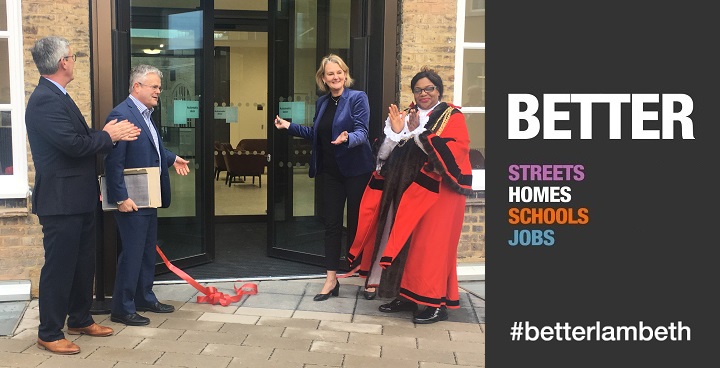 The Mayor of Lambeth, Cllr Marcia Cameron, joined Lambeth Council leader, Cllr Lib Peck for the ceremony at the building which has been closed for the last 18-months.

The town hall was built between 1905 and 1908. The red brick building with Portland stone dressings had had a series of extensions and additions over the years which had diluted its character. The office space inside had become tired and outdated.

The refurbishment has fully respected its original heritage aspects, but it is now fully accessible, meets far higher environmental standards and will be open to the community in new and innovative ways.

Cllr Peck said: “I’m delighted to be able to re-open the Town Hall today, it looks absolutely fantastic. This building has stood at the centre of our civic pride for more than 100 years and we have ensured it will continue to hold this important place for many more decades.

“Beyond that the refurbished town hall will provide more community space – something our residents have asked for – and we are also really delighted to be able to offer start up space for new businesses at reasonable rent in this building.”

The town hall refurbishment is part of a wider project to reduce Lambeth council’s core office buildings from 14 to two, saving at least £4.5m a year. It also includes the creation of 219 new homes for rent and sale, of which 47 per cent will be affordable, including those recently completed in Wynne Road, Brixton.

The project, which will see the council’s new Civic Centre open further along Brixton Hill in March, remains on time and on budget. Cllr Peck and Cllr Cameron were joined at the ribbon cutting by Project Director Andrew Boyle from Muse and Cllr Paul McGlone, Lambeth’s deputy leader. Muse Developments are the council’s development partner on the project.

In November a topping out ceremony was held for Brook House which will have 48 affordable homes including 34 homes at social rent, as well as 46 private apartments. Brook House behind the town hall used to be Lambeth council’s housing office.