The Metropolitan Police have launched a new ‘Be Safe’ campaign to help prevent motorcycle and scooter thefts in the capital, which have been rapidly rising alongside the use of scooter-related crime. 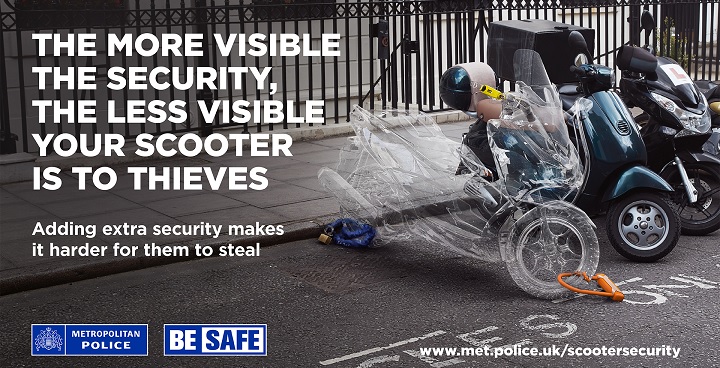 In the last year, there’s been a significant rise in scooter, motorcycle and moped-related offences across London. Over 15,000 motorcycles and scooters were stolen – that’s over half of all vehicle theft in the capital. And stolen two-wheelers have also been associated with a lot of other crimes – many of them brazen and dangerous.

The Met Police have launched this campaign in partnership with Lambeth Council to encourage scooter riders to use more security. Scooter owners are being targeted because they have so far been the least likely to invest in solid anti-theft devices and locks for their vehicles.

The campaign message is: “The more visible the security, the less visible your scooter is to thieves; adding extra security make it harder for them to steal.”

This campaign message is advertised in top scooter theft hotspots and parking bays across Lambeth. Stencils were installed in early October.

In some theft hotspots across the capital, there will also be advertisements on buses carrying the message. These will be seen travelling around Lambeth, and other London boroughs. The Be Safe campaign is operating in support of Operation Venice, which is the Met’s overall strategy to tackle motorcycle and scooter crime.

Council secures over £300,000 to make Lambeth’s streets safer for women and girls

Lambeth Council has secured an extra £331,915 to bolster its work to tackle violence against women and girls (VAWG) across the borough.