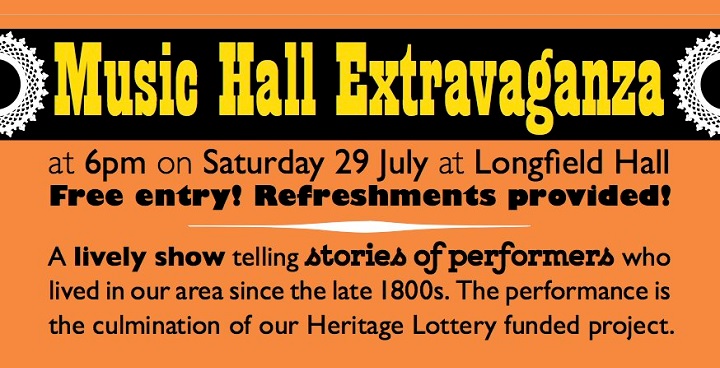 Local young people have helped create a show about the history of Longfield Hall and its links with the theatre  – going back more than 100 years.

They helped local writer and broadcaster Steve Martin research during workshops. The information they discovered at Lambeth Archives will be transformed into the Music Hall Extravaganza on 29 July. The show delves into the life stories of performers who lived and worked in the area and around Myatt’s Fields.

Stars of the show

The show also explores the history of Longfield Hall itself. The hall opened in 1889, with a theatre tradition from the Cinderella dances of the early 1900s to its role as home to the UK’s first Black theatre company, Dark and Light Theatre, in the 1970s. renamed as the Black Theatre of Brixton, they performed more plays by black writers in two years than the whole of UK theatre had done in 20.

Get ready for the show

Local children and families can help prepare for the show during two free art workshops run by South Island Arts. They will help participants make all sorts of props and objects to bring along to the show. These workshops are at Myatt’s Fields Park on Sunday 23 July, 2.30pm to 4.30pm and at Longfield Hall, Thursday 27 July, 4pm to 5pm.

The show on 29 July starts at 6pm and is free for the whole community to attend. Refreshments will be provided.

S.I. Martin is a British author, historian, journalist and teacher, specialising in Black British history and literature. More information on his website at www.simartin.org.uk.

More about the entertainers featured in the show