Windrush: Portrait of a Generation captures the lives of the generation of Caribbeans who came to live in Lambeth 70 years ago, and their families. Now it is on show in a Clapham church central to the community. 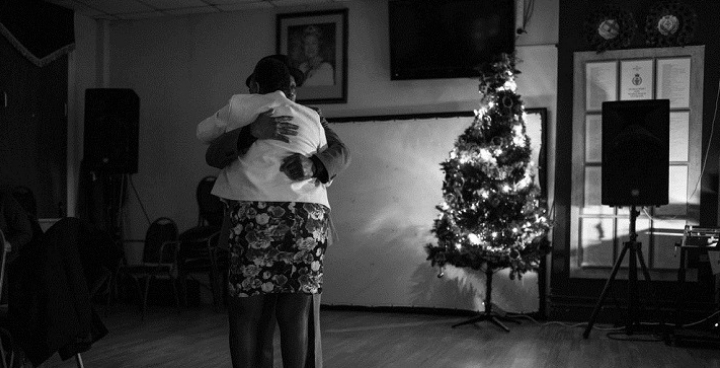 Church leaders are hosting 80 photos of the lives of local people from the Caribbean in churches in Clapham and Angell Town for Black History Month. The pictures reflect everyday life – including the church as a centre for the community.

Q: Which photos inspired you to have the exhibition in your church?

A: The image of Monica Blair standing in the streaming sunlight under the banner which reads ‘Be Still and know that I am God’, is very evocative. It’s a powerful photo and speaks so well of Mrs Blair’s quiet yet strong faith. Trevor Neil’s portrait speaks of a quiet dignity that he always has, even with the dominoes leaping in the air, is very dynamic. I love the graveside photos at Mrs Bailey’s funeral -they speak of a positive and celebratory way of dealing with death, and the photo taken outside Mrs Williams house during the nine night after she died shows the community coming together at a time of need.

Q: What does the Windrush generation bring to the community that makes it important to celebrate them?

A hard working ethic. This generation helped rebuild Britain after the Second World War in a major way, they played a huge part in the establishment of the NHS, they were heavily involved in constructing our buildings and transportation among other things. They also brought a committed and strong faith which has enriched, inspired and served our churches, not just the Church of England.  They have made such a needed and positive contribution to modern Britain and that should be recognized.

Q: How does the church bring generations together?

Cllr. Sonia Winifred Cabinet Member for Equalities and Culture said: “We’re delighted that, in Black History Month, community churches in Lambeth have been able to welcome home to the borough this celebration of the first generation of Caribbean people whose culture has enriched all our lives for 70 years”.