Lambeth Council is working with Lewisham and Southwark Councils on the Pathways to Employment Programme to help tackle long-term unemployment. 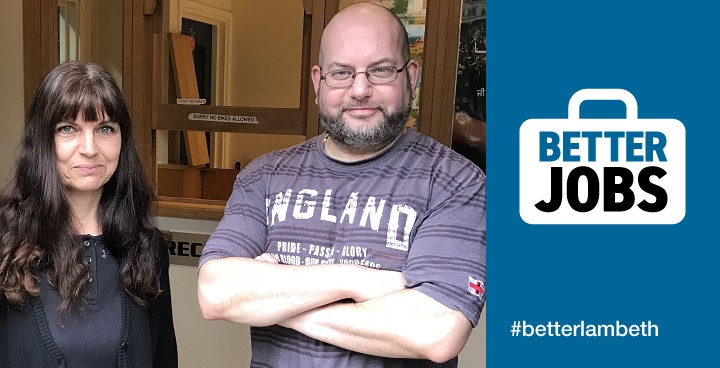 It particularly focuses on helping people overcome barriers they may face in getting a job, or getting a better job; be that housing problems, debt, childcare needs, mental health issues, a lack of suitable skills.

People are referred to the service by Jobcentre Plus at points where they are found to be at risk of long-term unemployment or already experiencing an extended period of joblessness, and offers one to one support.

Since 2014 when the programme first started more than 400 long term unemployed people have been helped into jobs and in total 2,000 people have been helped move towards work, better jobs or a new career. The benefit to the public purse delivered by the scheme more than outweigh its costs. Two people benefitting from the scheme are Chris and Kathryn who both believe Pathways to Employment has made a huge difference in their lives.

Chris, 44, who currently lives in Catford said after an extended spell of unemployment due to mental health issues he was keen to get back into work by finding a part time role. He was referred to the programme from the job centre and is currently undergoing pre-employment check for a full-time role with a Government department.

Chris said: “I was on employment support allowance and part of me getting back into work was by aiming to find a part time job. I’d worked all my life until fairly recently, but became unemployed as a result of suffering depression. I always want to be in work and I need a job that it suitable for me so we looked at the kind of work I’ve done in the past like warehouse jobs.

“I don’t expect to be paid millions, I just want to be able to live in the city I was born in and comfortably enough to enjoy my life. I’ve been struggling to get the part time work I’d been seeking, we think because of my mental health history, so its been difficult.

“But after a year of support I’m actually now going through employment checks for a full-time role. We’d changed my CV a few different times depending on the role; retail, warehousing… anything along those lines. In the end the first full time job I applied for was this one – and I’ve been offered it as long as I pass the security checks.

“The support here has given me more confidence with looking, for a start. Because it’s one-to-one I get support from the beginning to the end, searching, applying, my CV, they’ve helped me deal with the pre-employment check emails and even let me put this place down as a reference. I’d be honest with you – without this support my head couldn’t have coped with it. For someone in my situation this service does you the world of good, I couldn’t of got to this point without it.” 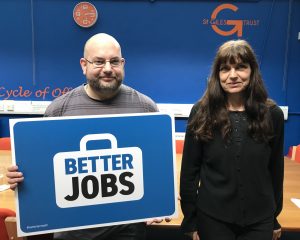 The Pathways to Employment Programme is run across the three boroughs because it was found those facing long-term employment in the areas had similar issues such as a lack of relevant skills and similar difficulties in navigating the existing support services. The three councils bid for government funding for the programme which is delivered by South London charity the St Giles Trust.

Another beneficiary is Kathryn, 54, who had been homeless and was facing eviction again. The team worked with her to address her housing issues, even lobbying her local MP and councillors for help, eventually securing suitable accommodation. Since that time the team helped her into short term roles, and are now helping her find a suitable long-term job.

Kathryn, who currently lives in Brockley, said: “When I first came here I had no confidence, I’d lost four stone in weight because of the stress I was under. They are brilliant here, not only do they help with the jobs, they also help people overcome bad situations – be that having been in jail or homeless. They literally put you on the right path.

“They’ve helped me with my CV yeah, we’ve applied for hundreds of jobs, but they also follow-up. They don’t just leave me to it, they phone me up and ask how are you getting on, did you hear back etc. So for me this is unbelievable, it’s so much better than anything else on offer; the support I’ve received means so much to me.”

Supporting at risk young people in Lambeth with a summer programme of activities.